This revolutionary battle sword includes a 24″ carbon steel blade, a brass handguard, and a pommel, and is complete with a leather scabbard and brass fittings. The Bunker Hill sword was designed to commemorate the June 17, 1775 war. When William Prescott commanded 1,500 colonies, he was defeated in a fierce battle that showed orders from both sides that the rag-tag colonial army was capable of standing its ground against the British ranks. This is the sword that played an important role in our history and till today people like this sword a lot. If you like this sword and want to get a Bunker Hill Replica Steel Sword at your doorstep, then order it now. To know about the features of Bunker Hill’s historical Sword, read the product description first.

Our own Online Swords Store Swords Kingdom contains a wide assortment of various types of Replica Swords that are solely available on our website. It is possible to obtain this Bunker Hill Steel Sword for a reasonable price because this sword is available at our store at a very cheap price. Buy our other stunning replicas from the Battle Ready category as well.

What kind of blade is it made of?

Its blade is made of a carbon steel blade.

Is there anything free with the sword?

Yes, an elegant-looking scabbard is free with this replica sword.

What are the shipping charges?

Customers who viewed this item also viewed these products 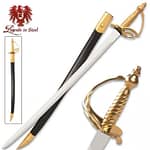