Gladiator was the armed warrior who saves the Roman Republic and Roman Empire from any violations with other gladiators, wild animals, and condemned criminals. Most of them were volunteers who risked their lives for national interest in the arena. While some were despised as slaves, schooled under harsh conditions, socially marginalized, and segregated even in death. Basically, the Gladiators were swordsmen in Latin. Gladiators were brave warriors from the 4th century BC in Ancient times. Some historians believe that most of the gladiators were slaves, prisoners of wars, or criminals, so their status forced them into their role.

The existence of the Gladiators was tough because they fight for their lives, survival, freedom, or honor. Their existence was like entertainment due to toughness and braveness. There were many people of Ancient times who choose to be Gladiator to grew his popularity. They were hungry for his glory and fame among the public because they were the strongest and most successful, and the money was also attractive for them. There were different types of Gladiators based on clothing and items used in fighting. Knives, Swords, Shields, and helmets were used by them, all these items were owned by the head of the school. The head of the school was responsible for all divisions of props.

We are offering Gladiators Helmet replica, if you are interested, read the product details first.

If you want Roman Gladiator Helmet at affordable prices, then you are in the right place. Order now and get it on your doorstep within 3 to 5 working days. You can check all items of Gladiators from our Gladiator Movie Swords category.

Can I buy it in bulk?

Yes, you can buy as per your requirements.

Will I get this Helmet at my doorstep?

Yes, you will get it at your doorstep.

How much do I have to pay for shipping? 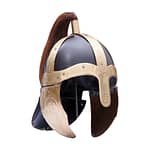