The bat’leth was a traditional Klingon blade weapon which is also known as the ‘Sword of honor’, and mainly used within canons. It is a legendary melee weapon amongst the warriors skillful in martial arts of the Klingon Empire. It was developed and designed by Visual effects Producer of the movie “Star Trek, The Next Generation”, Dan Curry, for the Star Trek Franchise. Bat’leth is the iconic image connected with the show, according to Curry. It has a smaller version also spawned which is called “mek’leth”. Bat’leths are so popular that they have become the part of the culture, showing up in television programs exclusive of the Star Trek franchise. Bat’leths replicas are widely collected and used in costuming. Used in crimes, often their legality has a difference when it comes to countries. It is considered as the Iconic Image for Star trek Universe.

Bat’leth was designed for the character “Worf” in the movie “Star Trek: The Next Generation” in 1990 by the visual effects producer. Worf is the first-ever Klingon character which was portrayed in the Star Trek Movie. In 2340 Worf, the son of Mogh was born at the Klingon Homeworld. His parents moved to Khitomer Colony later after five years. During the surprise attack by the Romulans on the Khitomer’s outpost, Worf’s parents were killed. The Federation starship USS Intrepid answered the colony’s distress call. After the failure in search of Worf’s living relatives, Sergey Rozhenko, Chief Petty Officer, took Worf along with him as he was found in the rubble. Though he was brought-up in humans, his inner-soul was filled with mannerism and a sense of humor of the Klingons.

We are presenting Klingon Batleth from the famous movie “Star Trek: The Next Generation”. You might have just seen this weapon in the film, but now you can purchase this daring yet elegant weapon and own it as yours.

Purchase the most demanding Klingon blade from our Online Store of Swords at reasonable prices. Apart from the Klingon Bat’leth, if you want to purchase any Movie TV Swords or Video Game Swords, then we are here for your help. SwordsKingdom is selling thousands of items at very affordable prices.

Are there any charges for blade sharpening?

Yes, you need to pay 5$ extra for blade sharpening.

Can I get a customized length Bat’leth?

Yes, for customizing length, you need to pay extra 40$.

Can I buy in bulk amount?

Yes, you can buy bat’leths in bulk amount. 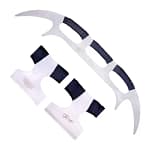