Elven Knife of Strider from The Lord of the Rings

Strider has served as a Ranger and joins the Fellowship to destroy the Ring that threatens his countrymen. Engraved on the blade are runes in the Elven language of Sindarin that say “Gud Daedheloth.” This translates to “Foe of Morgoth’s realm.”

Aragorn or Strider as he was known among the peoples just outside the Shire’s borders was named for his ancestor Aragorn I, who was born on March 1 in 2931 of the Third Age, the son of Arathorn II and his wife Gilraen. Through his ancestor Elendil whom he closely resembled. Aragorn was a descendant of Elros Tar-Minyatur, Lord Elrond Half-elven’s twin brother and the first king of Númenor. When Aragorn was only two years old, his father was slain while pursuing Orcs. Aragorn was afterward fostered in Rivendell by Elrond. At the request of his mother, his lineage was kept the secret, as she feared he would be slain like his father and grandfather if his true identity as the descendant of Elendil and Heir of Isildur became known. Aragorn was renamed Estel, Sindarin for Hope, and was not told about his heritage until he came of age in 2951.

At that time, Elrond revealed to Estel his true name and ancestry and delivered to him the shards of Narsil and the Ring of Barahir. He withheld the Sceptre of Annúminas from him till he came of the right to possess them. It was also around this time that Aragorn met and fell in love with Arwen, daughter of Elrond, who had newly returned from her mother’s homeland of Lórien. From then on, Aragorn assumed his proper role as the sixteenth Chieftain of the Dúnedain, the Rangers of the North, and went into the wild, where lived the remnants of his people, whose kingdom had been destroyed through civil and regional wars centuries before. This is the official 20 inch Elven Knife of Strider. The blade is polished and etched with Elven runes and has a scabbard with an antiqued finish solid metal collar and tip.

For more replica swords, check our shop page for whole movies swords categories. We have a vast collection of pairs of swords, save your money by buying sets of swords from the given products below.

Are there any charges for blade sharpening?

Yes, there are some charges for blade sharpening. For that, contact customer chat service.

What comes free along with the Sword?

It comes along with a free display stand.

What is the construction material of the sword?

The sword is made up of high-quality stainless steel.

Is there any cost of shipping?

Yes, there are extra shipping charges applied on it. 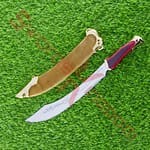